The monument is in the square where the plane tree, the so-called “of Hippocrates”, is located. In the fountain of the mosque, which is located a few meters north of it, there is a built-in inscription with Old Turkish characters, which states that it was built by Gazi Hansan Pasha, in the year Egira 1200, ie 1786. Gazi Hassan Pasha (1713-1790) was a kaputan patsa, ie an admiral, governor of the islands, and had allocated money for the construction of the mosque, which, according to one source, was built on the site of an older church of Agios Georgios.

The monument, due to its large dimensions (23×17 m.) and its austere, cubic shape, stands imposing in the space. It has two floors, a rectangular plan and a large, four-pitched tiled roof. Along the perimeter, apart from the west side, large windows with arched ends and glass windows are arranged in two consecutive rows, which aesthetically lighten the “heavy” character of the monument. The masonry consists mainly of tuffa of different shades, of marble and ancient building material in second use, the combination of which achieves a remarkable visual effect. In the northwest corner rises the tall minaret, which features a balcony.

The main prayer hall is located on the first floor and has two entrances. The first one is located on the north side and is accessible by an external straight staircase, made of marble and covered with a gabled tiled roof with a frieze that rests on two thin colonnades. To the west of the prayer hall there is an elongated space that forms the narthex. The two spaces communicate with a door surrounded by a monumental marble aedicule, framed by two half-columns, on which rests a blind arch inscribed in a square marble frame. On the drum of the arch there is a sculpted marble inscription in Old Turkish characters, where an excerpt from the Koran is mentioned.

In the center of the east wall of the prayer hall and in its thickness opens the mihrab, the alcove of the prayer, at the top of which there is an inscription with an excerpt from the Koran. Adjacent to it, we find the minhber, the pulpit. Both of these elements are placed at a slight elevation in relation to the rest of the floor of the room, and are luxuriously made of white marble. In particular, on the sides of the minbar staircase, the marble surface is ornately decorated with embossed geometric and plant motifs. In contact with the west wall there is a wooden raised ground floor with a small semicircle balcony in its center, which is accessible by two staircases on either side of the entrance.

The luxurious construction of the room is completed by the painted decorations, which mainly consist of the depiction of columns with capitals between the windows of the upper row, which appear to support the ceiling and rest on pessaries and imitations of marble cladding. Also, under each window of the upper row there is a painted composition that mimics a folded fabric ribbon, which surrounds a curved rhombus piece of jewelry that encloses a floral wreath with a star in the center.

The configuration of the ground floor follows, in general, that of the first floor, where in place of the narthex we find a through portico with two arched openings, supported by five thin, marble monolithic columns which functioned as a passage from the southern road to the open area of the square with the plane tree. The rest of the ground floor is divided into eight narrow spaces, which were originally built as cells to accommodate Muslim visitors, while later they were used as storage spaces.

As mentioned above, north of the mosque is a fourteen-sided fountain, made of white marble and ancient building materials in second use, which is covered with a dome supported by seven arches and columns.

Nowadays, the mosque is in relatively good condition. It displays natural wear of the wooden building materials, but also of the stone structures, especially those made of tuffa. During 1996, its roof was rebuilt. Additionally, a study for the conservation and restoration of the mosque has been drawn up. 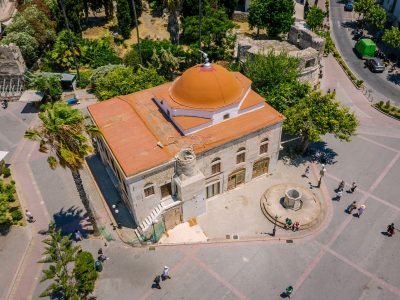 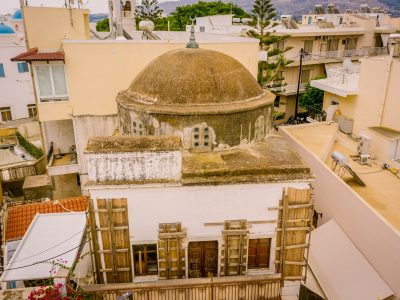 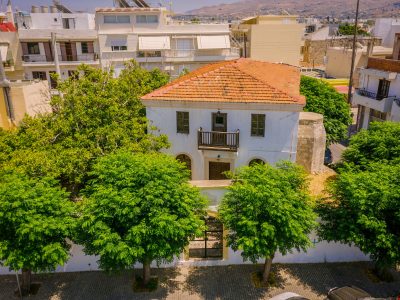 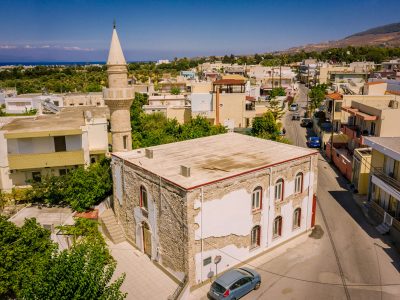